Carri of Fox World Travel recently took a trip to The Big Apple.  Hear all about her experience here!

When my children graduate from high school, their gift from us is a vacation weekend of their choice.  This time it was my daughter’s turn, and she chose New York City for her celebration weekend.  We took along several friends who had also never visited the Big Apple.  We planned a busy weekend because in my daughter’s words “I’m going to be a poor college student for a very long time and won’t be able to do this on my own, so I want to see as much as possible on this trip”.

Day 1 We arrived into La Guardia and within five minutes saw Honey Boo-Boo and her mom ordering fast food in the airport.  A hilarious start to our weekend!

Our hotel for three nights was the Crowne Plaza Times Square.   I chose this hotel for the excellent location at 49th and Broadway, situated right in the heart of Times Square, the Theatre District, and within steps of the stop for the Hop On/Hop Off.

On my daughter’s “must do” list was a craving for authentic New York Pizza.  We had asked our 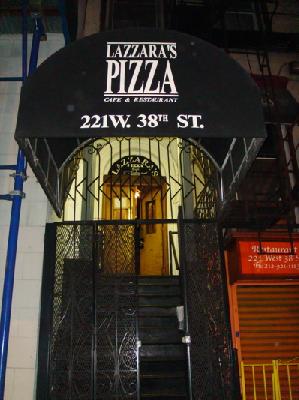 limo driver for a recommendation, and he steered us to Lazzarra’s Pizza in the Garment District.  After checking in to the hotel and dropping off our luggage we took off on foot to find this place.  It was a quick 15 minute walk from our hotel and the pizza was fabulous.

I wanted everyone to see the Statue of Liberty by night, so I booked the Harbor Lights Cruise with Viator.  We sailed at 7pm as the narrator pointed out various sights from the water.  This was a 90 minute cruise along the shoreline and the East River, highlighted by cruising around the Statue as the sun set.  The scene was beautiful as the Statue glowed and the NYC skyline twinkled in the night.

Another “must do” was to find a food cart that we had seen on the TV show Diners, Drive-Ins, and Dives.  The Halal Guys operate a cart featuring Indian cuisine.  We found the original location, and for $6 we received a huge bowl of steaming chicken, rice, and vegetables accompanied by various sauces.  It was delicious!  Every time we passed the cart over the weekend there was a long line of tourists, locals, and businessmen.  We later learned that this cart brings in $4000-$5000 on an average day!  (Pictured is the line for the food cart!  Photo courtesy of the Halal Guys official website)

Day 2  Next on our list was a visit to the 911 Memorial and Museum.  I had visited the Memorial in the past, but was looking forward to the Museum which just opened on May 21st.  We purchased tickets ahead of time and when we arrived we walked straight in to a line marked “Top of the Hour

Tours”, bypassing lines of people waiting to purchase tickets.   The 911 Museum is very well done, but impossible to describe.  It takes you through every aspect of the tragedy, even showing you video coverage of the terrorists passing through airport security on that terrible day.  Visitors are able to view profiles and pictures of every person who perished that day, and listen to stories told by their friends and family members.  We listened to recordings left by the victims on voicemails to their loved ones, and saw the stairway that many of the survivors used to escape that day.  There are far too many things to even begin to describe.  We spent four hours here but agreed that you could easily spend a full day here and not see everything.  It was truly a moving experience, and a place that I think every American should visit. Photo courtesy of 911memorial.org

Day 3  This morning we biked through Central Park.  Biking through the park on a summer Saturday morning was slightly chaotic.  People were skateboarding, biking, and running, and there wasn’t much room to maneuver.  There were so many runners on the trails that I mistakenly assumed that it was a race.  It was actually just weekend traffic.  I think biking would have been much more enjoyable midweek.

By this time we were starving, so we found an Irish pub for lunch before heading off on our next adventure, the TMZ Tour.  This is a great idea for anyone who is up on pop culture.  We saw numerous homes of movie stars and music people, including Katie Holmes, Robert DeNiro, Keith Urban and Nicole Kidman, Beyonce and Jay Z.   We saw the “in” restaurants, clubs, and hotels, and saw the entourage waiting for the arrival of Kim Kardashian and Kanye West.  His birthday party was being held there that night.  It was a fun fast two hour tour and I’d highly recommend it.

At that point we decided to check TKTS for last minute show tickets.  TKTS is a booth in Times

Square that offers discounted show tickets for that evening’s performances.  Based upon a recommendation we grabbed tickets at $50 each to see Fantasticks – the world’s longest running musical.  We hustled off to the tiny theatre and enjoyed this hilarious performance.  My daughter said it was the highlight of her weekend.

After the show we headed to Ellens Stardust Diner for a late dinner.  This is a “must do”!  Ellen’s is a retro 1950’s themed diner where the wait staff sings and performs.  Prices were reasonable, the food was great, and the entertainment was incredible.  There is a lot of talent working in this diner and we had a great time here.

Day 4 Our busy, fun-filled weekend ended with a quick NYC breakfast of a bagel and coffee, followed by our private transfer back to La Guardia.