Included Features:Sightseeing with a Local Guide, inside visits, and special features are shown in UPPERCASE

Day 1 ARRIVE IN BUENOS AIRES, ARGENTINA. Welcome to Buenos Aires, proud capital of the vast country that occupies most of the southern part of the continent. Your hotel is available for mid-afternoon check-in.

Day 2 BUENOS AIRES. Included private sightseeing starts in the colorful La Boca district, site of the city's first port. Take a short WALKING TOUR of this unique neighborhood, then on to San Telmo, famous for its late-colonial buildings and a popular gathering spot for artists. At the Plaza de Mayo, see La Casa Rosada (the President's Pink House) and the Metropolitan Cathedral, which houses San Martin's Mausoleum. Drive past the ornate Colon Opera House before reaching the CEMETERY OF THE RECOLETA, burial site of Eva Perуn. This evening, perhaps savor the city's atmosphere on an optional dinner at a local restaurant, followed by a performance of Latin America's most sensuous dance—the Tango! (B)

Day 3 BUENOS AIRES-USHUAIA. Fly to Ushuaia, the “End of the World,” situated on the island of Tierra del Fuego. Once a secluded outpost and penal colony, Ushuaia is now a growing community thriving on timber, fishing, and tourism. This afternoon, enjoy a PRIVATE TOUR OF TIERRA DEL FUEGO NATIONAL PARK to learn about its bountiful flora and fauna. With the Chilean Andes as the backdrop, the scenery is nothing short of spectacular. (B)

Day 4 USHUAIA (EMBARKATION). Embark on your 4-NIGHT CRUISE aboard the Stella Australis. The voyage will take you through channels, bays, fjords, and past massive glaciers, snowcapped mountains, and unexplored areas of incomparable beauty. During the night, traverse the Beagle Channel to cross from Argentina into Chilean waters. (B,D)

Day 5 CRUISING: CAPE HORN & WULAIA BAY. Around the break of dawn, cross into Nassau Bay and enter the remote archipelago that comprises Cape Horn National Park. Disembark in Cape Horn National Park (weather permitting) to see Cape Horn, a sheer, almost 1,394-foot-high rocky promontory where the Atlantic and Pacific Oceans merge. In the afternoon, go ashore with your Naturalist in historic WULAIA BAY, once the site of one of the region's largest aboriginal settlements. Here, walk through a Magellanic forest and keep an eye out for elephant seals! (B,L,D)

Day 6 CRUISING: PIA & GARIBALDI GLACIER. Overnight, continue around the western end of Tierra del Fuego via the very narrow Gabrial, Magdalena, and Cockburn Channels to Pia Fjord. Here, board the zodiacs for exploration of PIA GLACIER. Take a short hike to gain a panoramic view of the spectacular glacier, which extends from the mountaintops down to the sea. In the afternoon, drop anchor near GARIBALDI GLACIER to see one of only three glaciers in Patagonia that is gaining mass rather than staying the same or slowly shrinking. Hike through virgin Magellanic forest to a glacial waterfall, a towering wall of ferns and moss, and spectacular viewpoints looking down on the glacier and fjord. (B,L,D)

Day 7 CRUISING: AGOSTINI SOUND, БGUILA GLACIER & CONDOR SOUND. Sail through the intricate channels of Tierra del Fuego to reach Cockburn Channel. At Agostini Sound, board Zodiac boats to explore БGUILA GLACIER, which hovers above a placid glacial lagoon surrounded by Patagonia's sub-Antarctic rainforest. Walk around the edge of the lagoon near the base of the glacier and keep an eye out for the condors that can sometimes be seen here. Learn from your Naturalist about the formation of glaciers and their influence on the abrupt geography of the region's channels. In the afternoon, cruise CONDOR SOUND via Zodiac and hopefully see some of the abundant Andean Condors in the area. (B,L,D)

Day 8 CRUISING: MAGELLAN STRAIT–MAGDALENA ISLAND–PUNTA ARENAS, CHILE (DISEMBARKATION). Cruise into the Strait of Magellan and anchor off MAGDALENA ISLAND where you will go ashore for a visit (weather permitting). Once an essential source of supplies for navigators and explorers, now this island is home to an immense colony of Magellanic penguins. During your walk, you'll also see the lighthouse, which guides ships on their way through the Strait of Magellan. In September and April, this excursion is replaced by a Zodiac ride at Isla Marta to observe sea lions. After your visit, sail to Punta Arenas and disembark. (B)

Day 9 PUNTA ARENAS–SANTIAGO. Fly to Santiago, Chile's capital. This country is more than 10-times longer than wide, with 2,650 miles of beautiful Pacific coastline. (B)

Day 10 SANTIAGO. Located in the center of the country and perched between the Pacific Ocean and the Andes, Santiago has evolved as the country's political, commercial, and cultural capital. Step back into the 16th century on your PRIVATE CITY TOUR as your Local Guide traces the city's history and heritage. Start at La Moneda, the official Government Palace, and nearby San Cristobal Hill with its landmark statue of the Virgin Mary. Your tour ends at the Plaza de Armas, the main square, with a visit to the 18th-century CATHEDRAL. (B)

Day 11 SANTIAGO-EASTER ISLAND. Fly from Santiago to Easter Island today. The island is considered the largest open-air museum, boasting over 400 moais, ruins, and temples. (B)

Day 12 EASTER ISLAND. Your first stop will be AHU VAIHU, where eight large moais lie in ruins. You continue on to AHU AKAHANGA, which is also known as the platform of the king. According to legends, this is the site where the bones of the first king of Easter Island (Hotu Matu'a) were buried. Your trip continues on to one of the most attractive places on Easter Island, RANO RARAKU, the volcano where 95% of all moai were carved. Today you can find 394 statues remaining in various stages of completion. There will be a hike to the top of the volcano to not only reveal many statues but also to admire a spectacular view on Rano Raraku's gorgeous freshwater lake. To some observers the quarry looks like a graveyard of giants' stone. It seemed as if production of moai was abruptly abandoned, leaving a frozen snapshot of time so we can look closely at how exactly the moai were carved out of the volcanic rocks. Next, visit the beautifully restored AHU TONGARIKI. This magnificent platform is the largest on the island with its 15 moai. Continue your trip along the north coast and pass through La Perousse Bay to stop at AHU TE PITO KURA, the site of the largest moai ever transported and erected onto an Ahu. Last stop is the beach of Anakena, where King Hotu Matua first landed on Rapa Nui. Anakena is one of two beaches on an island surrounded by a rough, black rock coastline. (B,L)

Day 13 EASTER ISLAND. This morning, visit the volcano Rano Kau, the second oldest on the island. Its caldera contains one of the island's freshwater lakes. Next, continue to the nearby ceremonial village of ORONGO, best known for the birdman cult celebrated here. Within the village, 47 houses have been restored and the remains of an ancient Ahu can also be seen. From here you'll have a magnificent view of the three small islands: Motu Nui, Motu Iti, and Motu Kao Kao. In AHU VINAPU you will see two major ahu where moai once stood. The fallen remains of the broken moai can now be seen lying on the ground. The figures here are slightly different from the others. While most do not have legs, this site contains moai with short legs. The last stop this morning is Ana Kai Tagata, a beautiful cave with wall paintings on the rock with paint made from mineral pigments found on the island. The paintings depict the Manutara bird. The arrival of this bird in spring would initiate the Tangata Manu competition (birdman competition). This afternoon, visit AHU AKIVI with seven restored moais, built in the middle of the island. According to an old legend, the seven moai statues on this ahu represent the seven scouts sent to Rapa Nui (Easter Island's local name) by King Hotu Matu'a. Finally, visit the topknot-quarry PUNA PAU with its red scoria stone, where all the pukaos that were placed on top of the moai were made. (B)

Day 14 EASTER ISLAND–SANTIAGO. Transfer to the airport for your return flight to Santiago. Transfer to your hotel for the night. (B)

Day 15 SANTIAGO. Your vacation ends with breakfast this morning. (B) 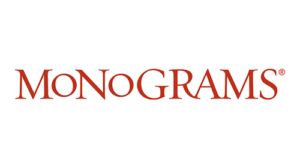 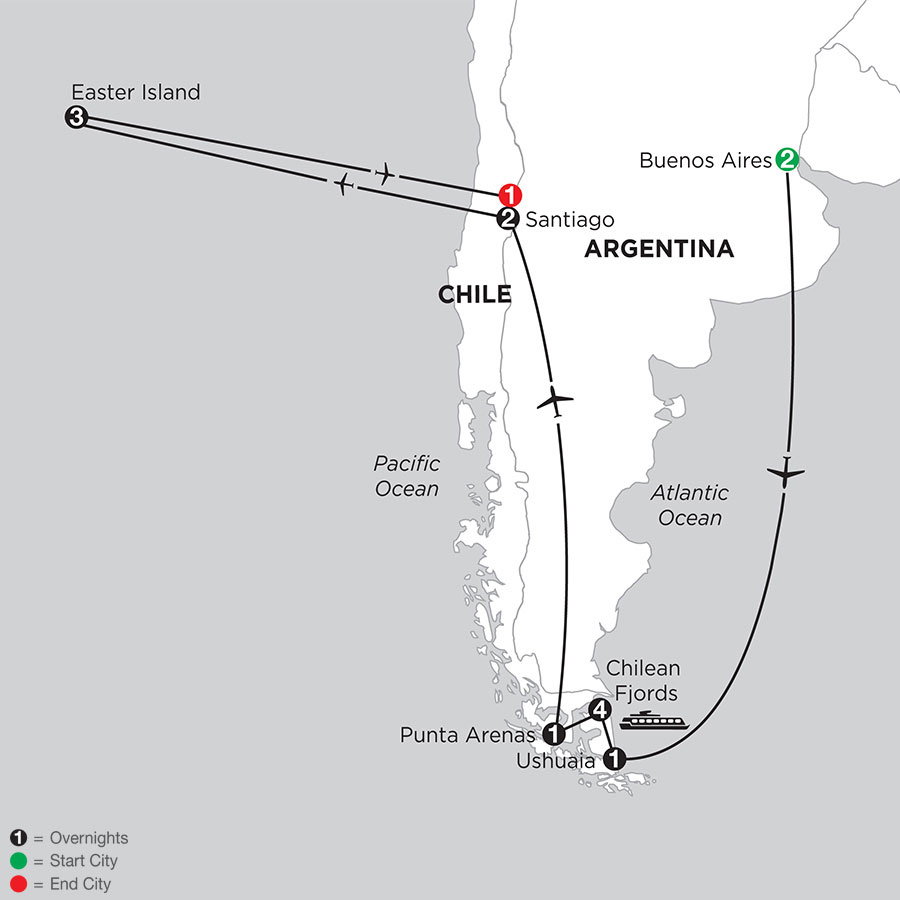