You've seen photos of the ancient Acropolis in Athens, dating back to the 5th century BC-now's your chance to see it in person on this escorted Greek vacation. You've watched the Olympics on TV-now's your chance to walk among the ruins in Olympia, where the Olympics began in 776 BC. You've eaten at Greek restaurants-now's your chance to enjoy an authentic Greek cooking demonstration, where you'll learn how to make the traditional Greek tzatziki appetizer. All this and more awaits you on this Greek Escape.History comes alive on your guided visits to many of Greece's ancient sites. In addition to the Acropolis and Olympia, you'll also visit the ruins in Mycenae, dating from 1,350 to 1,200 BC and described in Homer's epic poem, "The Iliad." Also see the amazingly well-preserved, 2,300-year-old open-air theater in Epidaurus. In ancient Greece, people traveled to Delphi to seek the wisdom of the Oracle. Learn about the Oracle, tour the excavations, and visit the Archaeological Museum. To add to your Greek experience enjoy a sirtaki dance lesson and try a glass of Ouzo. Plus, you'll be accompanied by an expert Tour Director who will bring this country to life by sharing its history, stories, and insider secrets. From the picturesque fishing villages to ancient historic sights, the Greek Escape has it all!Included Features:ATHENSWelcome drink; guided sightseeing, visit the AcropolisCORINTHCross the canalMYCENAEGuided visit of the excavations and museumEPIDAURUSGuided visit of the 2,300-year-old open-air theater OLYMPIAGuided visit of the archaeological site and the museum; learn how to make the traditional Greek tzatziki appetizerDELPHIGuided visit of the excavations, visit the Archaeological Museum; learn to dance the sirtaki and have a glass of OuzoARACHOVAVisit the picturesque mountain town

Day 1 ARRIVE IN ATHENS, GREECE. Welcome to Athens! At 6 pm, meet your traveling companions for a welcome drink with your Tour Director.

Day 2 ATHENS. Sightseeing with a Local Guide features a visit to the world-famous ACROPOLIS, perched high on a rocky outcrop overlooking the city. Here, see the Parthenon, the Erechtheum with its Porch of Maidens, the Temple of Athena Nike.Enjoy a panoramic view that includes glimpses of the Temple of Olympian Zeus, Theater of Dionysus, and the Agora, where Socrates taught, with the beautifully preserved Theseum. Later, a city orientation tour features the Parliament House and a photo stop at the Panathenaic Stadium. Built in the 2nd century AD, it is the only stadium in the world built entirely of marble, and was host to the opening and closing ceremonies of the first modern Olympics in 1896. The rest of the day is at leisure. Tonight is your chance to join an optional dinner outing to try the local fare. (B)

Day 3 ATHENS–CORINTH CANAL–MYCENAE–EPIDAURUS–NAUPLIA. Stop at the spectacular Corinth Canal to take a photo. Highlights today include MYCENAE, where 19th-century excavations reveal impressions of the splendors so vividly described by Homer. Admire the Beehive Tombs, known as the Treasury of Atreus; Lion Gate, Europe's oldest known monument; the remains of Agamemnon's Royal Palace; and the impressive fortifications of the Citadel. Also visit the museum before continuing to EPIDAURUS for a tour of its amazingly well-preserved 2,300-year-old OPEN-AIR-THEATER. Stay overnight in nearby Nauplia. (B,D)

Day 4 NAUPLIA–OLYMPIA. Take in the spectacular scenery on the way through the Arkadian Mountains. Then, spend the afternoon in OLYMPIA, where the athletes of antiquity competed in honor of the King of Deities. Learn about the history of those original Olympic Games as you walk among the impressive remains of the Gymnasium and the Temples of Hera and Zeus. Also visit the MUSEUM displaying Praxiteles' magnificent statue of Hermes. Tonight, enjoy a COOKING DEMONSTRATION and learn how to make the traditional Greek tzatziki appetizer. (B,D)

Day 5 OLYMPIA–DELPHI. Journey to mystic Delphi. The afternoon is devoted to a fascinating tour of the ancient sanctuary of the god Apollo in its dramatic setting on the slopes of Mount Parnassus. Hear about the Oracle and tour the EXCAVATIONS. End the day with a visit to the ARCHAEOLOGICAL MUSEUM to admire the Charioteer, an extraordinary 5th-century-BC bronze statue. A highlight this evening is a DANCE LESSON, where you'll learn how to dance the sirtaki, made famous in the movie Zorba the Greek, accompanied by a glass of the traditional Ouzo. (B,D)

Day 6 DELPHI–ARACHOVA–ATHENS. Leave fascinating Delphi behind you this morning and head back to Athens stopping en-route in the pretty town of Arachova located on the slopes of Mount Parnassus. Enjoy panoramic views and stroll around the town to admire the picturesque architecture before arriving in Athens with time to do some last-minute exploring on your own. Tonight is your chance to savor more Greek delicacies with an optional dinner at a local restaurant. (B)

Day 7 ATHENS. Your vacation ends with breakfast this morning. (B) 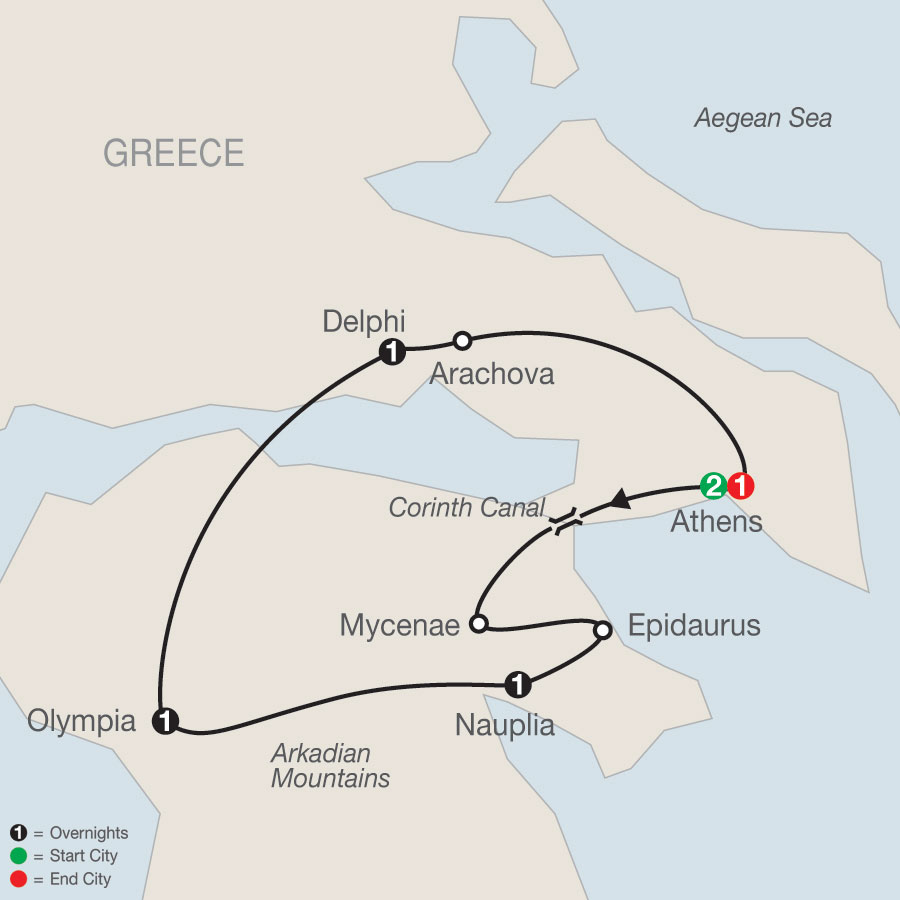